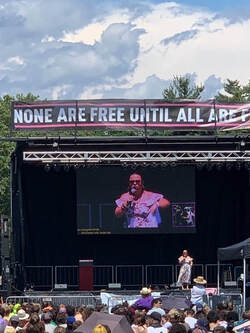 June 28, 2019 marked the 50thanniversary of the Stonewall riots, in New York City, where LGBTQIA folks fought back against police harassment and violence targeted at them. The anniversary of this riot became known as the Pride celebration that is now celebrated across the globe every year at the end of June. While the mainstream Pride parade organizers in NYC cultivated corporate sponsorships, the radical LGBTQIA community organized a counter “Queer Liberation March,” which culminated in a rally. WMW US representative, and Director of Grasstroots Global Justice Alliance, Cindy Wiesner, spoke at the rally calling for Pride to be reclaimed by grassroots feminists, like the Stonewall rebellion initiators Marsha P. Johnson, Sylvia Rivera, and Stromé DeLarverie. She also reminded the crowd that radical folks from the LGBTQIA community have always been at the forefront of all struggles for social justice, including gender, racial, and climate justice. She reminded the crowd that it is our duty to continue our legacy and lead the fight against the climate crisis, capitalism, white supremacy and imperialism.  “…we queers have been land defenders, water and sky protectors, we are demanding a just transition to a new paradigm: local, regenerative, economies. Where energy is decentralized, where we are in right relation to nature, where people not corporations have a say in the protection of the commons, where we have durable housing, food sovereignty, energy democracy, where we get to have real democratic participation of our communities.”
Also, in June, the US chapter of the WMW, in collaboration with the chapters from Brazil, Mozambique and Guatemala, with the support of the Indigenous Environmental Network and Grassroots International, supported and participated in the seminar:“State and democracy in debate: our proposals from the feminist economy and the common confronting the neoliberalism.” The objective of the seminar was to express a new political articulation of the fourth wave of feminism. To articulate a global diversity of feminisms that challenge the gender binary, neoliberalism and the contradictions of racism and the classist manifestations of the second wave of feminism, while integrating internationalism, spirituality and feminist economics.