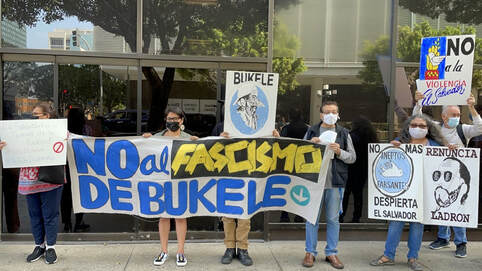 Today, El Salvador survives the negative results of the process of elections of Deputies during the month of February and to municipal councils, in which democracy was compromised by the political campaign around the figure of President Nayib Bukele, who took advantage of his position, taking measures that impacted the other political parties.

In statements for this space Isabel López Guevara, Coordinator of the World March of Women in that country, pointed out that among the aforementioned actions stands out the fact that the resources that the contending parties receive based on the votes they obtained in the previous election were not delivered and this limited their resources to carry out their political campaigns; and she added that the central government also did not deliver the funds to the municipalities, a situation that caused popular unrest that turned against the municipal governments for not carrying out planned works.

"With these results the Salvadoran government acts as if it has received full power and with the mandate to make all decisions that in the past it had not been able to, since a multi-party assembly prevented it from doing so. The first action as the most urgent measure was the dismissal of the judges and the Attorney-General of the Republic, an action that for many constitutes a blow to democracy, an attempted coup d'état. Many countries in the world have condemned this fact, calling for reconsideration and the reversal of this decision, since it undermines the interdependence between state bodies.”

“As a result, Civil Society Organizations feel that they have returned to the times of the civil war, during which time they were persecuted and singled out for expressing disagreements with the dictatorial actions of military governments. In the twenty-first century, all human rights organizations continue to be threatened, especially those who have received funding from previous governments."

For the WMW in that country the challenge is not to see their work hindered, especially at a time when the data on violence against women are increasingly alarming.

According to a report published in the Diario de Hoy, dated May 17, the Ministry of Health, "... in the first quarter of 2021, records 527 cases of pregnant girls between 10 and 14 years, of these 100 girls gave birth in public hospitals, none had prenatal care. One of the victims is visually impaired and the accused rapist is the child's uncle.”

It is her statements López Guevara added that the education of young people and children continues to be worrisome, as schools continue to operate under hybrid (in person-remote) modality, most of them offering online classes to children who are able to attend while others have discontinued their studies because they do not have the necessary conditions, like internet access and the necessary equipment.

“Unemployment continues to be critical, coupled with violence, the disappearance of young people is causing an exodus of people to migrate, illegally and at great risk, to the United States and other countries around the world, there is also a strong internal migration from the countryside to the cities, from communities and municipalities to other cities, fleeing violence and threats from armed groups.”