Quebec:
Towards the fifth international action of the World March of Women 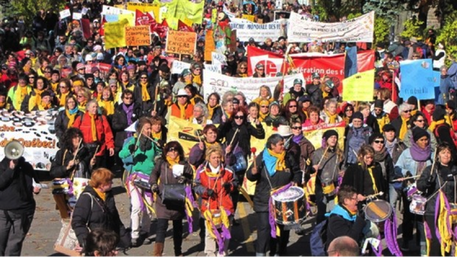 “The origin of the World March of Women:
Following the success of the March of Bread and Roses against poverty organized by the Quebec Women’s Federation, the idea of ​​embarking on a world march of women to mark the beginning of the 21st century, germinated in the imagination of activists and delegates from Quebec, and from several countries of the South that joined this great mobilisation ” Michèle Asselin
The Quebec Coordination of the World March of Women (CQMMF) was born to carry out concerted actions by regional and national organizations of autonomous women’s groups and committees on the status of women and mixed organizations throughout Quebec.
This coordination has a long history, its first actions and marches date from the early 2000s.
Its operation is based on the principles of participatory and feminist management, of a democratic life oriented towards the collective affirmation of women, all inspired by the living memory of the collective heritage of the feminist movement.
Its mission is to promote equality between women and men, between women themselves and among peoples, contributing to eliminate the causes of poverty and violence against women.
This commitment has its roots in Quebec, but it is in solidarity with all the women of the world in maintaining and developing ties with the national coordinations of the region of the Americas and internationally with the movement of the World March of Women.
Our adherence to the values ​​of the World Charter for Women for Humanity is unequivocal. This chart is based on the values ​​of equality, freedom, solidarity, justice and peace.
Until 2018, the CQMMF was coordinated by the Quebec Women’s Federation, from that year it was restructured as an independent organization.
The coordination is now in charge of a committee composed of five representatives of the regions and five representatives of national groups. In addition, work committees were created that are responsible for various tasks: international solidarity, finance, autonomous feminist popular education, communications, political action and mobilization.

Towards the fifth international action of the World March of Women
Currently the Cn of Quebec is organizing the fifth International Action. Since 2018, member groups have been consulted on the demands to take to the streets in the V Action, agreeing on five demands that, according to the militancy, reflect the situation of women in the Quebec territory: Poverty, Violence, Climate Justice , Migrant and immigrant women and Indigenous women will be the struggles that will lead the agenda.
After the adoption of these demands as fight flags for 2020 and the 5th International Action, the Autonomous Feminist Popular Education Committee set to work to prepare the formations that will allow the appropriation and rooting of these demands, as well as the necessary mobilization to get a positive response.