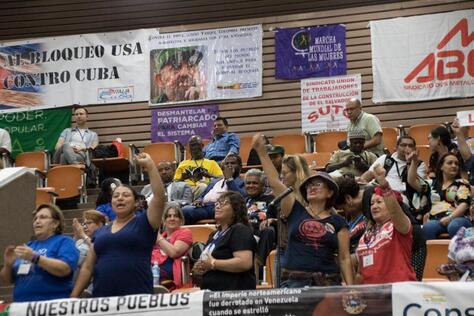 In November 1-3, 2019, more than 1,200 persons from more than 80 countries got together at the Anti-imperialist Encounter of Solidarity for Democracy and Against Neoliberalism. It was a great moment of unity of delegates from hundreds of organizations, who came to reflect on the challenges of the continent’s current context. The encounter was organized by the Jornada Continental por la Democracia y contra el Neoliberalismo, together with the Instituto Cubano de Amistad a los Pueblos, and other Cuban organizations.

The three days included panels about the current time, thematic debates, exchanges in the barrios, open tribunes, expositions by the movements, and moments of solidarity with Cuba, Venezuela, and all the peoples who are in the struggle. Nicolás Maduro, President of Venezuela, and Díaz-Carnel, President of Cuba, spoke in the closing plenary.

Dismantle patriarchal and racist capitalism
The first panel has a debate on the imperialist challenges faced by the left, with the participation of Nalu Faria (WMW/Brazil), Atilio Borón (Argentina), Yasmin Bárbara Vázquez (Cuba), and José Luis Centella (PC/Spain). The alliance among movements was presented as a strategy capable of a popular offensive against imperialism and neoliberalism, which are creating lies, impoverishing populations, and using violence as a method. In this sense, popular communication has become one of the tools to demonstrate what the media monopoly is actually hiding.
“Our struggle is anti-systemic, against the hetero-patriarchal and racist capitalist model that is destroying nature and is treating some human beings as disposable; that is making exploitation of labor and lives more acute, and controlling even more our bodies as female and male, LGBTQ, black, and indigenous workers. We want to build another society,” said Nalu Faria.
For this, it is necessary that feminism and environmental justice are fundamental parts of the struggle: “The capitalist model imbricates patriarchy and racism, and it is necessary to dismantle, in an articulated manner, all these systems of oppression. (…) It is not only a matter of incorporating the rights of women, black, and Indigenous peoples, but also of learning about their experiences, as it is the case of Indigenous Peoples who, more than 5,000 years ago, have been living in harmony with nature.”
In the afternoon, the Encounter was opened to the Anti-imperialist Wave, a moment of exchange among participants and movement building in the networks, with tags such as #ManosFueraDeCuba and #SeguimosEnLucha. As well, an open anti-imperialist tribune added the voices of fighters from different countries and their local struggles.
At nighttime, the participants visited the CDRs (Comités de Defensa de la Revolución, Committees for the Defense of the Revolution) in the Barrio de Barbosa, to the west of the Cuban capital. We had presentations from children, a table full of food, and chats about the importance of the CDRs for the organization of life, and the maintenance of the Revolution in the barrios, where women play leadership and protagonist roles. At the end, we had a great show in the plaza, with musical groups from Cuba and Venezuela, and speeches from militants like Iridiane, from the Movimiento de Mujeres Campesinas (WMW/Brazil), and Cindy Wiesner, from the movement It Takes Roots (USA and WMW), who spoke about the struggle of the people in USA against President Donald Trump. 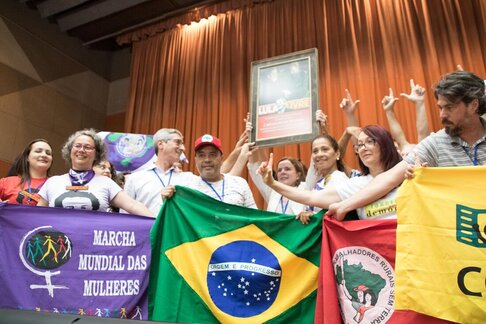 Solidarity and articulation to overthrow neoliberalism
On Saturday (2nd), we began the day with a panel about the challenges for building a solidary articulation of our struggles. Karin Nansen (Amigos de la Tierra/Uruguay), Mónica Valente (Foro de São Paulo/Brazil), Ismael Drullet (Capítulo Cubano de Movimientos Sociales/Cuba), and Manuel Bertoldi (Asamblea Internacional de los Pueblos/Argentina) spoke.
The recent struggles in Haiti, Ecuador, and Chile were shown as examples of the popular movements resisting neoliberalism and the anti-democratic regressions in the region. “The coups d’état and the militarization are realities that limit people’s lives. It is imperative to denounce who the perpetrators are, said Karin, indicating the need for international solidarity to be translated into a joint agenda for the struggles.
Following this, more than 2 million signatures from Cubans demanding freedom for Lula were delivered. Solidarity and Internationalism are principles that have to take on concrete forms in practice.
In the afternoon, the participants were divided into thematic commissions to deepen the following themes: solidarity, confronting transnational corporations, communication, youth, democracy, sovereignty and anti-imperialism, integration. The contributions of these spaces enriched the debate and the consensus building for the Encounter’s plan of action and final declaration.
At nighttime, an open plenary of the Jornada Continental gathered hundreds of people to move forward in the construction of articulated actions. “From our spirit of building trust and unity in diversity, collectivizing our efforts, let us work now and throughout the next year in an articulated manner to give continuity to proposals about the just transition, for confronting the false solutions of the green economy, dismantling patriarchy, fighting against patriarchy, fighting against neocolonialism, racism and all the tools of capitalist domination,” states the document.
The organizations present, movements of workers, youth, Indigenous, and women, all signed the commitment to act in alliance in actions such as the People’s Summit in Chile, the International Action of the WMW, the Anti-imperialism Week, the Day of Action Against Dams, and the CSA’s Congress. Since its beginning, in 2015, the Jornada Continental has brought in the perspective of the permanent struggle against translational corporations and free trade, in defense of democracy, and the integration of peoples, having environmental justice and feminism as transversal axes.

Building an anti-imperialist and revolutionary project
On the last day, the Declaration of Solidarity with the Cuban Revolution and the final Declaration of the Encounter were clamored by the plenary. The final declaration affirms the responsibility to continue an intense, permanent, and integrated mobilization, as well as to denouce the threats and attacks against peoples’ democracy and sovereignty worldwide. For the Sarahui People, for peace in Colombia, for the independence of Puerto Rico, for Lula’s freedom, for Palestine, and many other processes of popular struggle.
It reiterates “the importance of moving forward in the construction of anti-imperialist unity among the political forces in the left and the social and popular movements, in relation to plurality, diversity, and the sovereign rights of peoples to freely elect their own political, economic, and social organization, convinced that unity is the only way to achieve victory in the confrontation of the peoples’ main enemy: US imperialism and its allies.”
In the closing plenary, Nicolás Maduro and Díaz-Canel spoke. Maduro spoke against the International Monetary Fund, neoliberalism, and all of those who accuse him of being a dictator in order to justify coups d’état and invasions. He said to be really worried about the threat of repression in Brazil and said that, “Lula’s imprisonment was a coup d’état enacted to prevent him from winning the elections.” He greeted the popular struggles in the Americas: “a new anti-imperialist wave is already emerging.” For him, it is necessary to build “an alternative project to neoliberalism, a humanist project that is deeply revolutionary.”
Díaz-Canel denounced the attempts of the people in power for destabilizing left initiatives. For him, “the first enemy is the anti-imperialist lie,” as it is with lies that they have invaded countries and destroyed peoples. The Cuban president denounced the economic blockade as a U.S. criminal policy. “It was not the first emperor who has imposed himself, it won’t be the last one to overcome,” he said about the U.S. President Donald Trump, who has been increasing the confrontation against Cuba. “The Cuban Revolution is here to prove that, yes, it is possible.” Díaz-Canel affirmed the importance of friendship among peoples, and among young people, who today, are rebelling. “No just cause exaggerates us.”