And the Peoples Summit was 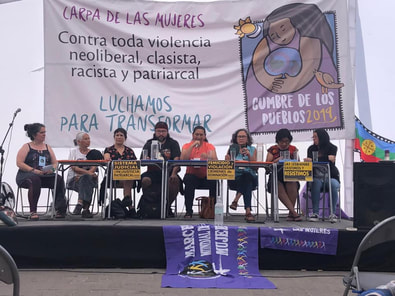 On October 18, at Santiago de Chile, secondary students carried out an action of youth rebellion that unleashed a chain of events and an uninterrupted mobilization to this day, reflecting the social discontent of millions of Chileans for the economic, political and cultural inequities suffered by the population.
Chilean women have not been oblivious to social mobilizations and even more, we set the agenda of the year with our March of International Working Women’s Day on March 8, 2019. On that date we were protagonists of a massive mobilization of more than one million people who convened and coordinated by the March 8 movement, marked a milestone in public demonstrations in our country.​

That is why we think that the social revolution in Chile, was hibernating, about to flourish at any time and that was what actually happened, “Chile woke up” was the slogan chanted by thousands and thousands of voices throughout the territory. And the government unable to control this social outbreak did what it has always done: use the force to suppress and quell popular discontent.
Under this inability to recognize that this system is not longer viable, the government suspended APEC, which was scheduled for  November 2019, but also suspended the COP25 that would have taken place the first days of December
Chile was marketed as “The pillar of the neoliberal system and of “market-driven development” and exported to the world, this being demolished as the reality of the growing inequality and social injustice is undeniable.
The same thing happens with the climate crisis that affects the planet and that increases day by day. For decades, women and feminist movements have presented an analysis and raised proposals on human, social and cultural rights to change towards a more peaceful, equitable, solidary and fair world, for a good life. We demand a revolution that frees people from enslaving systems under consumerism, indebtedness and lack of socio-cultural opportunities; under this capitalism that exacerbates the extraction of resources, labor exploitation, racism, colonization, the commodification of nature and our bodies, emphasizing militarism in the territories and imperialist hegemony.
That is why social movements and women said there will be no COP, we want instead a People’s Summit, and that is why women kept our agenda, with the conviction that human rights defenders and environmental rights defenders in our country continued to support our own goals, alternatives to the false solutions that corporations and governments propose for the reduction of greenhouse gas emissions.
We proposed at that time, that regardless of the fact that COP25 goes to Spain, the environmental crisis in Chile does not end, nor does the effects of climate change. The environmental crisis is also a social crisis. And the world will not take its eyes off Chile, nor will it remain indifferent to what happens and what the people demand: Save the Earth, change the System. and that can only be achieved through a constituent Assembly for a new Constitution.