Women’s tent 2019:
Against all Violence We fight to transform… 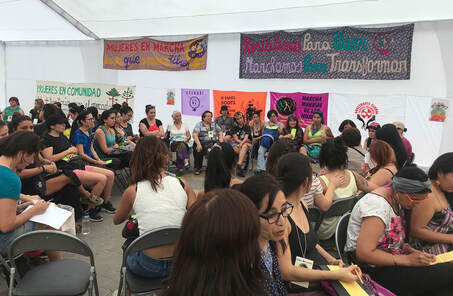 Considering the current context of Chile, the social revolt that erupts from the hands of thousands of brave young people in October 2019, and the transfer of COP25 to Madrid, the social movements decided to keep the People’s Summit after an organizational process of months.
This is how, during the week of December 2 to 6, the Women’s Tent was raised in the Summit of the Peoples within the framework of COP25, a space that is gestated together with other feminist and women’s organizations, among them the Chilean Network against violence against women, the socio-environmental Committee of the Coordinator March 8, the Movement for Water and Territories - MAT, the Latin American Observatory of Environmental Conflicts - OLCA, Colectivo VientoSur, ANAMURI, the Heinrich Böll Foundation and the World March of Women.
The Tent was a space that was risen to ensure our presence and feminist vision in the discussion about the climate crisis that we are going through as humanity, but also to ensure the visibility of the resistance processes and alternatives that are being developed and carried out throughout the national territory and in Our America. So, with the presence of our marching partners in the region and various organizations we presented their realities in the face of climate change and the alternatives they are developing to face this crisis, which is nothing more than a consequence of the capitalist-patriarchal system that has been predating our bodies and territories for years.
We started with an assembly of women and feminists that allowed us learn about our chores and feelings in the face of the social revolt and to know and share the organizational experiences of the sisters who traveled from other territories and countries.
We conducted an ethical tribunal where we heard different voices of denunciation, from the ravages of soybean agribusiness in Paraguay, through the business femicide of Macarena Valdés and ending with the search for justice for the lesbo femicide of Nicole Saavedra.
We debated feminist economics and reflected together with the CLOC-Via Campesina on the possibilities that arise from the peasant hands to cool the planet. We listened to the voices and experiences of women recyclers in the region who do wonderful and essential work.
​We ended by talking about the structural violence we experience every day as women, migrants, workers, peasants, feminists, students and indigenous people. How difficult and complex it is to be a woman in these contexts of political and climatic crisis, concluding that we need to empower ourselves and build movement.
During those days in the tent, we rescued the joys, the laughter, the music, the artistic creation of the hands of various women who accompanied us all week. We believe that this process ratifies our conviction that roads are built with affection, respect and from our feelings.
Without a doubt, it was a week full of learning from the voice of those who are resisting, of those women and communities that every day struggle for their permanence and existence and that collectively create alternatives that give us a halo of hope that another world is totally possible.