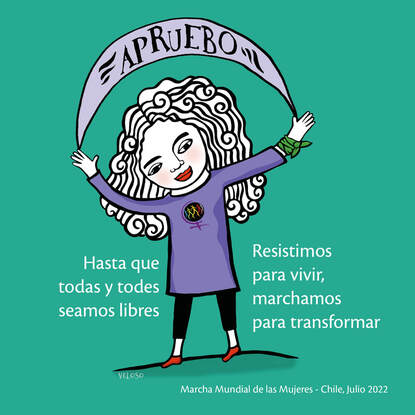 Firm and convinced I approve of the exit.

Since October 18, 2019, within the Chilean territory we are living a transcendental historical-political and social moment. On that day, we woke up with rage and pain for all the years of precariousness, dispossession, exploitation and systemic violence that we have endured.
As feminist women and as an organization, it is imperative to take a public position and that is why we adhere to the APRUEBO option for the upcoming Constitutional Exit Plebiscite on September 4.
We recognize ourselves in the desire, effort and determination of the Social Organizations and Constituent Conventionalists, promoters of normative initiatives in the Constitutional Convention that reflect the intention that life and good living are at the center. We are grateful for the work done by those who fought to ensure and extend the fundamental rights, of which we have been deprived until now.
As the World March of Women, we consider indispensable the integration of such valuable principles as plurinationality, rights of nature and common goods, parity, popular and food sovereignty, including the right to water, solidarity and strengthening of human rights, among others.
We believe it is essential to defend the advances that will materialize thanks to this new Constitution on issues that, as an organization and over the years, have become our banner of struggle in relation to our feminist militancy: sexual and reproductive rights, specifically the voluntary interruption of pregnancy without grounds, elimination of sexist and patriarchal violence, recognition of care as work, children's rights, sexual diversity, just to name a few. Now is the time to sustain our contribution!
Since the social outbreak we rose up as a people, to disrupt the neoliberal model implemented by the 1980 Constitution, illegitimate, authoritarian, conservative, individualistic and perpetuating social inequalities and the privileges of the elites, imposed on us through the illegitimate use of force, repression, torture, deaths and forced disappearances that to this day keep many families in a state of mourning and permanent pain.
The current Constitution has been a functional tool for post-democratic neoliberal governments, which have only deepened a mercantilist and repressive economic model with respect to the lives of people and territories. It is time to put an end to these ties. In this new constitution it will be the duty of the State to promote and guarantee the full participation of women and historically excluded groups.
We will continue to fight for the recognition of our dignity, supporting the freedom of political prisoners, for the exercise of our rights. Until all of us are free.
We Resist to Live, We March to Transform.
World March of Women - Chile July 2022