Encounter of the World March of Women in Havana, Cuba

WMW of the Americas plans its 2020 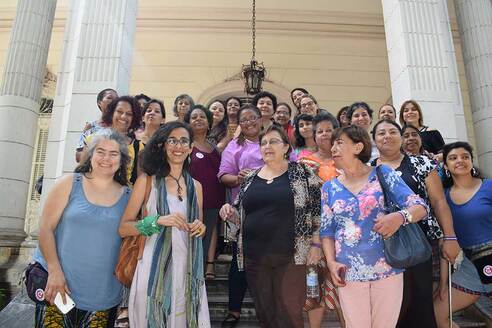 Thirteen national coordinating chapters of the World March of Women, region The Americas, met at the headquarters of the Federation of Cuban Women (Federación de Mujeres Cubanas, FMC) on October 30-31 of last year to celebrate the continental gathering towards the preparative work for the V International Action.
The FMC secretariat, Teresa Amarelle Boué, welcomed the delegations from Argentina, Bolivia, Brazil, Cuba, Chile, El Salvador, United States, Guatemala, Honduras, Mexico, Peru, Quebec and Venezuela. She manifested her deep gratitude for the support received from the World March of Women in the denunciation and permanent struggle against the genocidal blockade imposed by the United States of America to the island.
Amarelle pointed that, the fact of celebrating the continental gathering in Cuban territory is an example of how the blockade can be overcome, and it is overcome daily by Cuba, and especially by female Cubans: “Cuban women are protagonists in life. There is nothing that Cuban women set out to do, that is prohibited to them,” she stressed.
The continental representatives of the international secretariat, Nalú Farías and Mafalda Galdames announced with joy the reincorporation of the coordinating chapters from Mexico and Honduras, and the incorporation of the Dominican Republic as a coordinating chapter.
The meeting’s agenda considered the reports of the national coordinating chapters, the presentation made by Nalú Farías and Mafalda Galdames of the international secretariat reports, and the discussion of the V International Action to take place during 2020, among other matters.

The continental situation
The presentations of the delegations show that the territories are living a new neoliberal attack, with women being at the center of the attack. There has been a loss of conquered rights that is evident in countries like Brazil and Bolivia; a worsening of militarism, denounced strongly by Honduras. All the territories are experiencing the persecution of social leaders, and in some, policies of extermination of local leaderships are being implemented.
Cuba and Venezuela presented the consequences of the illegal blockades and underlined that the measures are directed to the peoples, waiting for peoples to be the ones to surrender the territories.
Throughout all territories, we can observe an upturning of religious conservatism and of neoliberalism, and as Bernardet Monteiro from WMW Brazil noted, “women are being targeted by the system and not because we are more vulnerable. We are living a moment of reconfiguration of the system, and this means the rethinking of our ways of getting organized.”
As a consequence of this reconfiguration of the system, the continent is living a migration crisis and violence against youth, Indigenous Peoples, afro-descendants, and against women and girls. It is a reality experienced in the South and in the North of the continent, as the presentations of the USA and Quebec delegations made it clear when they described the persecutions and dispossessions experienced by native peoples, afro-descendants, migrants, and poor white people in those countries.
Given this landscape, the delegates asked: How to build resistance in the moment of the offensive? And, how this resistance strengthens the World March of Women in the Americas as a movement? Nalú Farías from WMW Brazil summarizes one of the consensuses reached at the meeting, “we need to deepen the debate, the situation in America is becoming more complex. After the wave of progressive governments, with their mistakes and limitations, an opposition was formed creating confusion and appealing to the more reactionary methods such as religious conservatism… The challenge is to connect our struggles with the struggles for democracy and against capitalism, gender ideologies, and the destruction of living conditions. We are resisting neoliberalism, thus, we have to remake our discourse.”
In the continental balance, the actions of the Chilean people were highlighted, as they have woken up and returned us hope. Also given us back hope is the resistance of the Cuban people, the capacity for organizing and response of the feminist movements at the continental level, the resiliency of the Venezuelan women, and the courage of the Mesoamerican and Peruvian Indigenous women confronting the extractive economy.