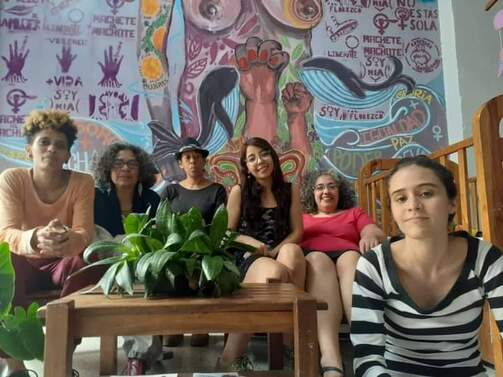 In every life there is a turning point when we make a decision and change course. That day for me and others, was when we found out about the femicide of Mayel Hernández. At that point arose the need to do more in the face of male violence, and with it the Mayel Hernández Voluteer Program, a training and accompaniment program for women in situations of male violence that has been led by the Tinta Violeta Collective, which is part of the Feminist Spider-WMW Venezuela.

Mayel was a young dancer, a student at the University of the Arts, a militant of the movement of Shack Dwellers, the mother of a girl who was being harassed by her daughter's father. She tried to seek help, went to the police and officials who failed in their duty and dissuaded her from filing the complaint. Months later Mayel was killed by the man she did not file an official report against.
For years we have been feminists, we have taken to the streets looking for better conditions in the protection and justice system for the sisters who are in a situation of violence. Among friends, we undertook the work of giving workshops here and there so that others could understand the terrible inequality generated by male violence in our society, for an adequate response to the cycle of partner violence, to get to know each other so that they could join their wills to ours. But, when we learned that Mayel had been murdered that day, we realized that we wished we had done more, we thought that if she or a friend had had a chance to call somewhere to ask what to do about this violence from an ex-partner, then… maybe she would still be alive.

We reflected in the collective, trying to understand how we could contribute in a concrete way. Looking at ourselves, scrutinizing our stories we discovered that our worst enemy was fear, fear of the system, fear of being alone in facing of the aggressor, the fear of losing our children, the fear, that powerful feeling that we can only defeat by coming together, taking each other’s hands, leaning in together. We realized that those of us who survived and escaped did so thanks to the women who were there with their love and solidarity.

In the Mayel Hernández Volunteer Program we do not serve, but accompany, our goal is to be there, with her, not to leave her alone, it is to be vigilant, is to be aware, is to remind her that she has an hearing at the prosecutor's office and to stand in line with her, it is to confront the officials when they do not want to receive the complaint, is to turn over every stone if a girl is missing, it is to accompany from love, to listen from love and to fight for her with love.

It is always thought that to attend to those who are being violated by patriarchy you must be a social worker or psychologist, and even though we are not saying that this knowledge is not necessary, in the Mayel Hernández Volunteer Program, having or not having those professions is not an impediment to participation. Volunteering starts from a training process that provides the necessary tools for accompaniment, with care and caring for us. The important thing to provide accompaniment, the sine qua non requirement, is to be willing to be there without judging, without making decisions for those who need to regain their voices, it is to understand that sometimes a woman is not ready to exit the cycle and we must respect that, it is knowing that she may return a thousand times to the aggressor, but that if we are there, perhaps on the thousand-and-first she will finally manage to leave and get out of the cycle of violence, it is to be willing to put your body on the line for the woman who calls on you, by the scared teenager who looks for us on Instagram and does not dare to give even her phone number.

The first group that formed was us and our friends, it was meant to be a workshop and ended up being a study, the Tinta Violeta space was filled with intense debates to determine what our position would be. We dove then into the complex web of oppressions, framing accompaniment from a place of sisterhood, with a feminist and intersectional perspective, because we know that being poor, or indigenous or elderly or with a disability puts you even further away from justice, from the possibility of being heard.

Today, many sisters and some brothers form the Territorial Accompaniment Network, the one that was born one day as we sat making a banner for sister Mayel. The Network no longer works only in the Tinta Violeta Space, not even only in Caracas, it is made up of comrades from 15 states around the country linked by loving accompaniment and the certainty that we are not alone, we are many, we are dozens, we are hundreds, we are thousands, and we will be millions.