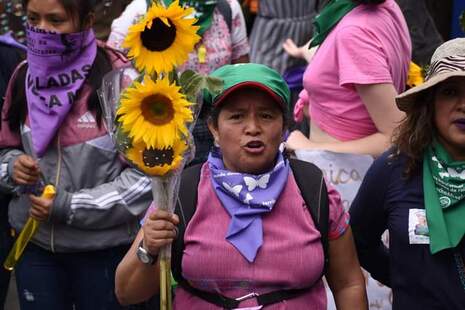 Last May, the Political Articulation of the Women's Sector of Guatemala celebrated 27 years of existence or to paraphrase one of its slogans, 27 years building a future for me, for ourselves and for the others.
To celebrate with the women of the Women's Sector Political Alliance we interviewed two Guatemalan militants, Sandra Moran and María Dolores Marroquín, who have been with this political articulation since its inception.

Sandra Moran the tambora woman, the first Guatemalan deputy to publicly declare herself a lesbian, a poet, a guerrilla, is also part of the founding group of the Women's Sector. In May 1994 Sandra joined the organization as a delegate of the Center for Research and Popular Education, CIEP. Later she would participate as a delegate for the collective Nuestra Voz and ARTESANA, she is currently a delegate of the organization Mujeres Feministas de Izquierda.

This is how the civil sectors are incorporated into building the peace, and the Assembly of Civil Society (ASC) was established in Guatemala, a space that called forcefully for the peace agreements to not only take into account the needs of the government, the military and the guerrilla, but also those of communities, political and social sectors.

It was not without debate 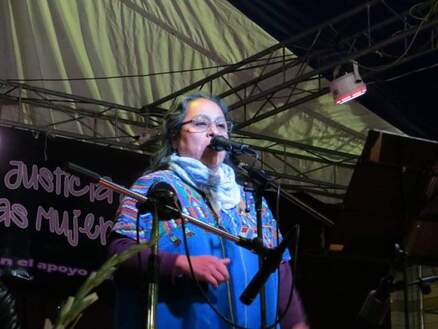 Sandra Moran
At first the women's sector was not in the ASC. Both Sandra and María Dolores remember that the creation of the Women's Sector included the classic debates on whether or not to create a Women's Sector, whether women and their demands were already contained or represented in the other sectors and whether or not the sector would divide the mixed sectors.

María Dolores points out “At that time more than 40 diverse women's organizations, from the popular, academic and political sectors, made a first agreement: to form the Women's Sector; this after many deliberations on the relevance or not of creating a specific sector, since many of us participated in the trade union and popular sectors.”

So women from grassroots organizations, widows, students, women participating in women's collectives and committees/commissions, that had been coalescing since the 80s in spaces like Coincidencia de Mujeres or Asamblea de Mujeres por la Construcción de la Paz, with professional women who had a track record in political parties and government positions and with all those women who came forward, the Women's Sector of the ASC was established.
The words of Sandra Moran convey the intensity of those days, "We were the ones who organized ourselves to make the problems of women visible in society and put them on the table for discussion with the other 9 sectors of society, the proposals of women… The sector then, is the result of a political agreement between more than 30 organizations who did not know each other, but knew we had to appropriate the space and take up the challenge ... We did it...”

Your struggle is my struggle

This first moment ends when the women of the various organizations realize that it is not enough to create institutions to overcome the conditions of exclusion and oppression they live in, it is then that the natural approach to feminism occurs.

In 2000, a new stage started for the Women's Sector, the only sector of the Civil Society Assembly that had managed to maintain itself over time, becoming the Women's Sector Political Alliance (APSM). Sandra points to this transformation as a political leap, which transcends the monitoring of the peace agreements to deal with the construction of the political subject of Guatemalan women collectively. Sandra characterizes the APSM as "The organization that dialogs and makes alliances with organized women in the peasant, trade union and other sectors. We have built political thought because we have decided to carry out education and discussion processes that we then systematized. We have been part of the Mesoamerican women in resistance, of the March and of the Alba movement.”
In 2006, APSM joined the March of Women as part of its search and growth within feminism and approaches such as internationalism or feminist economics.

The Future does not arrive, it is built