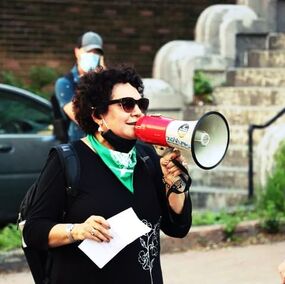 Since the World March of Women in the Americas we remain pained and concerned about the situation of our comrades from Colombia and Palestine, as both nations are going through moments of internal struggles and social destabilization mainly attributable to patriarchal capitalism which, in its attempt to maintain its domination, threatens territories and peoples, with a direct impact on women.

We denounce the situation in Colombia, where there is a marked erosion of the credibility of its institutions, in which more than seven million of its inhabitants live on approximately $39 a month and 46.7% of women are living in poverty; where forced disappearances continue, without a comprehensive policy to prevent them; a country in which the youth, increasingly affected by unemployment and poverty, is among the most active sectors in these necessary demonstrations of disobedience to the government that controls and criminalizes all practices that oppose it.

We recognize that the people deserve better living conditions, negotiations based on agendas which contemplate their demands and a government that governs for the people and not for monopolies, landowners, transnationals, drug traffickers, in short, the capitalist mafias.

When we face the realities suffered by our fellow comrades of Palestine, we are outraged at seeing how many people had to leave their homes with their children for fear of Israeli attacks in the blockaded Gaza Strip, continue to pay the highest price for the occupation. With their families, they took shelter in schools belonging to the United Nations Relief and Works Agency for Palestine Refugees in the Near East (UNRWA) and several have died or seen their daughters or sons die in the face of an invasion that continues to use religion as a pretext. What religiosity are we talking about when it has cost the lives of at least 66 children? What religiosity are we talking about when an entire people is forced to abandon their lands, their roots, to see their homes destroyed, to be separated from their families...?

Enough of stealing the right of the Palestinian people to dream of better days, enough of subjecting their wives, children and elders to living in fear and panic, to hopelessness. The Israeli Security Forces must withdraw from the Palestinian territories, allow and guarantee the exercise of the freedoms of expression, association and assembly. No force should be used against those who exercise these rights peacefully. For all this we condemn these actions in the most categorical way, nothing can be above the life of any person in their own land, and nothing is above the right to protest as an essential part of being humans. We reject all kinds of physical, psychological and sexual abuse of people, we echo and join in the international community's denunciation of any violation of fundamental rights that, repeatedly, are suffered by the peoples of Colombia and Palestine.