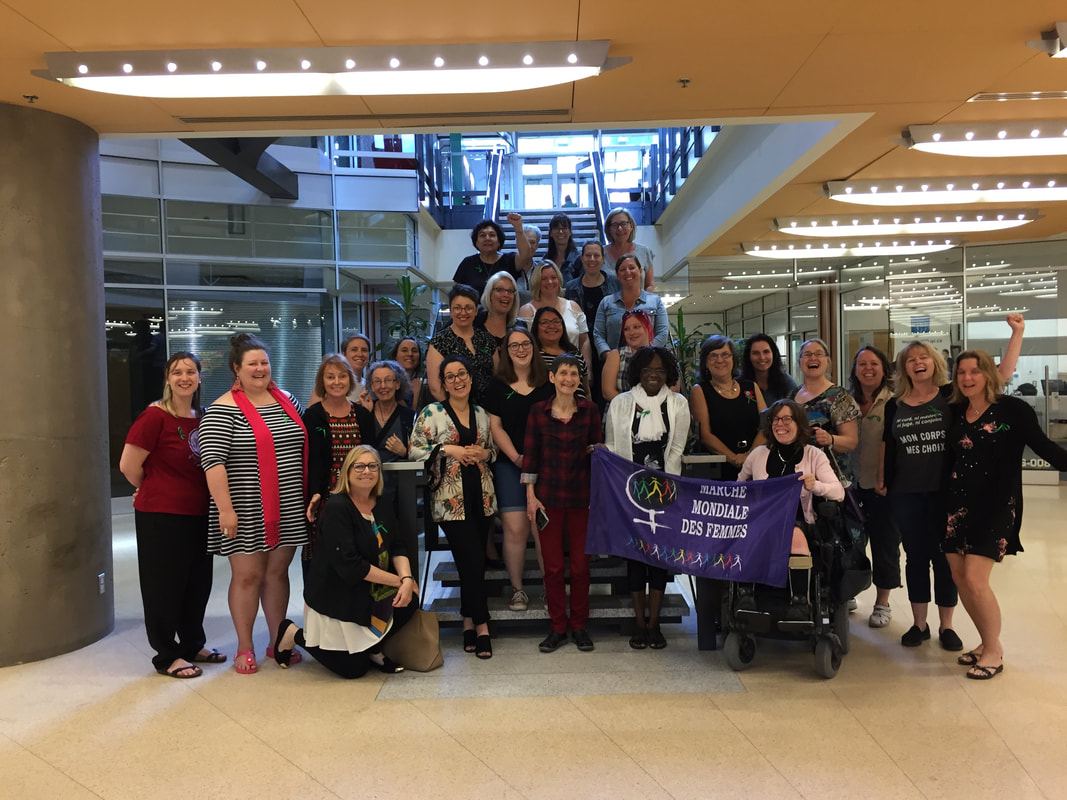 As part of the preparatory work for next year, the World March of Women’s chapter in Québec (CQMMF) got together to define its demands for 2020. The selected issues for future action of the MMF are: fight against the poverty of women and their families, fight violence against women, fight against environmental destruction, including climate change and its consequences and effects on women’s daily life (migration, impoverishment, etc.), solidarity and support for migrant women and their families. The last two issues (environment and migrants) are inspired on the work performed during the last international meeting of the WMW in Bilbao, at the end of 2018.

It was also decided to work on the five values of the Women’s Global Charter for Humanity: peace, justice, solidarity, freedom, and equality.

The Québec chapter’s demands for 2020 will be announced in September of 2019. The Committee for Feminist Autonomous Popular Education will begin the creation of tools that will allow a better understanding and appropriation of the topics and demands selected by the CQMMF. These tools will be produced using an intersectional feminist analysis of the problematic. During the meeting of June 10, we reflected on the strategy for obtaining financial resources in 2020 that will allow us to mobilize all regions in Québec and meet our goals.

Another important exchange we had at the meeting was about the current situation in the world. The WMW members are very worried about the attacks women are experiencing in the context of the rise of the right wing. In some countries, women’s rights have been increasingly recognized in the last few years, but these are beginning to be questioned, and others have been clearly abolished. This is the case of the right to abortion!

The WMW agreed upon a solidarity declaration that was sent to the media in Québec about the right to legal, free, and safe abortion!

​
MY BODY, MY DECISIONS, OUR RIGHTS, IT’S THE WOMEN WHO DECIDE!


The members of the Quebec Coordination of the World March of Women (CQMMF) gathered today at a general assembly in Quebec City stand in solidarity with and support women who demand the power to control their bodies.

Several countries, including several states within the United States, have passed laws to restrict or even prohibit the practice of abortion. This is an unprecedented attack on women's rights. This situation will result in human tragedies, since women will have to resort to illegal abortion practices which can have terrible consequences on their physical and psychological health.

At times like these, we recall the important battle waged by feminists and Dr. Morgentaler, who bravely confronted anti-choice activists who were against the right to an abortion. Dr. Morgentaler was even imprisoned years ago because of her commitment to women having the right to decide their lives, and make decisions about their own bodies.

The chants of the 1980s that Quebecers shouted out loud is still relevant today:

No priest or doctor. No judge or spouse. My body. My decision. The women decide!